For the ultimate day of the EFPT Lanzarote another round of the junior divisions was on the schedule. Unfortunately the wind remained too light throughout the morning and just started to pick up around 2.00 pm, not providing enough time to start and finish the single and double elimination for the kids.

With many spectators on the beach and the riders being keen to hit to water, a supercross session was launched. 17 pro riders, two EFPT crew members and all eight junior riders signed up for the popular format, which combines slalom racing and freestyle tricks. The riders had to do an upwind trick on the first leg, a forward loop on the second leg and a downwind move on the last one. Every buoy had to be passed with a duckjibe.

It was great fun to watch a fleet of 19 riders race against each other, throwing big moves on every leg. The most popular upwind move had been a kono, that some riders came out of faster than they went into. For the downwind move most sailors chose the culo or spock before passing the finish line. The pro fleet raced four times with some clear favorites: Steven Van Broeckhoven (Gunsails/Starboard), Kiri Thode, Davy Scheffers and Sam Esteve (JP/Neilpryde) were leading the pack in most of the heats. Taking victory in the end has been Steven Van Broeckhoven by winning two heats, in front of Kiri Thode and Davy Scheffers. 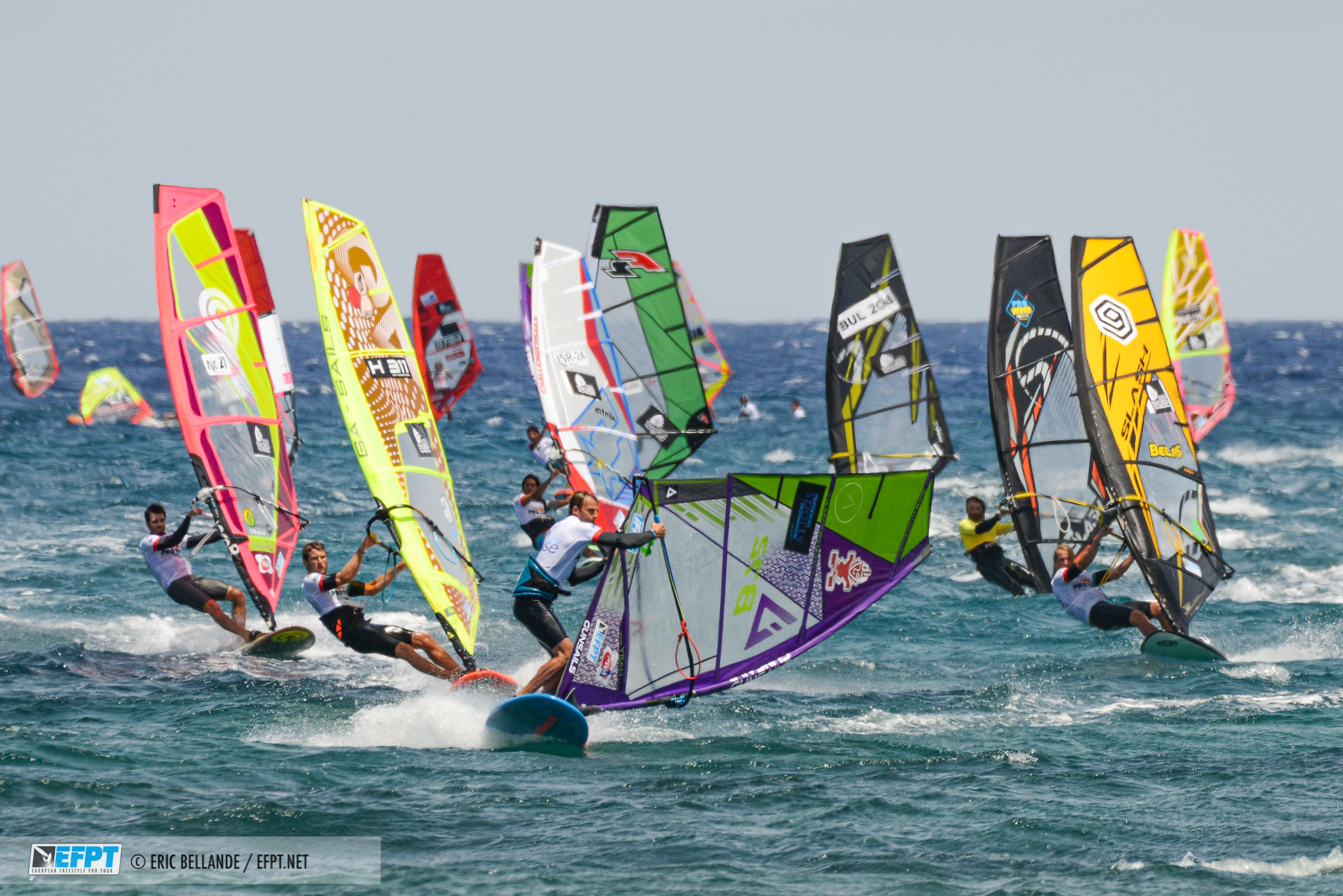 Since it was all under the sign of fun, the last round on the water saw the whole pro and junior fleet together. It definitely looked like the riders enjoyed the race a lot and there have even been requests on running a supercross at every event. 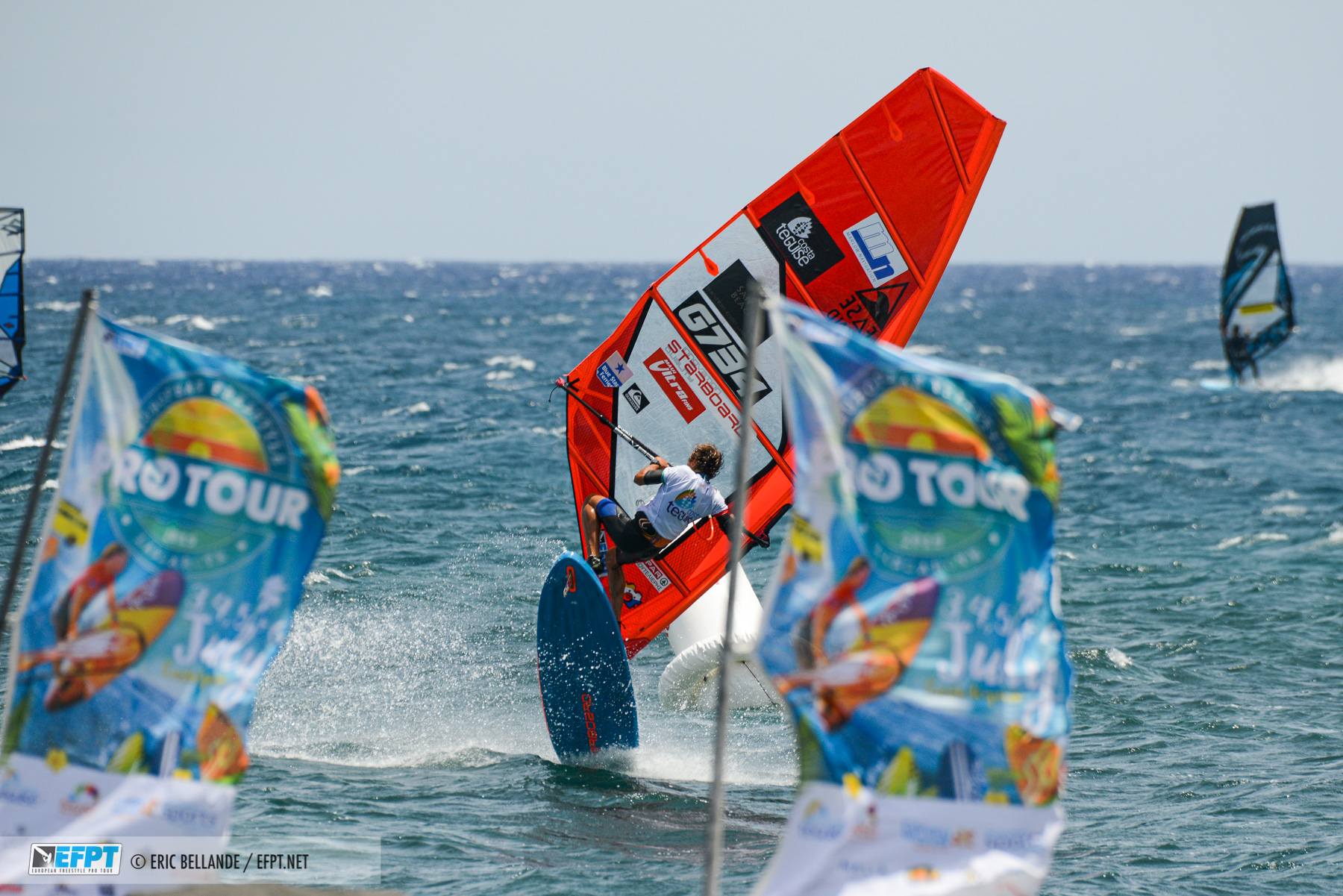 Lennart with a forward loop in front of the finish line

The big prize-giving where all the winners of this event will be awarded takes place tonight in front of the Melia Salinas Hotel, that has been hosting the crew and riders, alongside the Sands Beach Resort, already over the past couple of years. The podium of the pro fleet is a reflection of last years podium. Antony Ruenes came in in third after a great fight in the double elimination and Yentel Caers once again dispatched off Adrien Bosson (Duotone/Fanatic) in the double elimination, who had been the leader after the single elimination, to claim his third victory on the EFPT in 2019.

It had been great to see the riders battle it out for the 6th time here at Las Cucharas, Costa Teguise and it was even more amazing to have such a high involvement of juniors, all in front the top guys of each division: Lennart Neubauer, who has been taking first place in the U16, followed by Tigo Kort and Bodhi Khempen and Nil Bacon Aubert, who won the U18 division followed by Eugenio Marconi and Stefan de Bell.

Nil Bacon Aubert is now leading the U18 overall ranking, whilst Neubauer is leading the U16. With one event for the juniors to go in October, the chase for the title in both divisions remains exciting.

We are looking back on yet another perfect event in Lanzarote and would like to thank the organisation team, the crew and the riders for four amazing days. We are looking forward to returning to Costa Teguise in 2020. 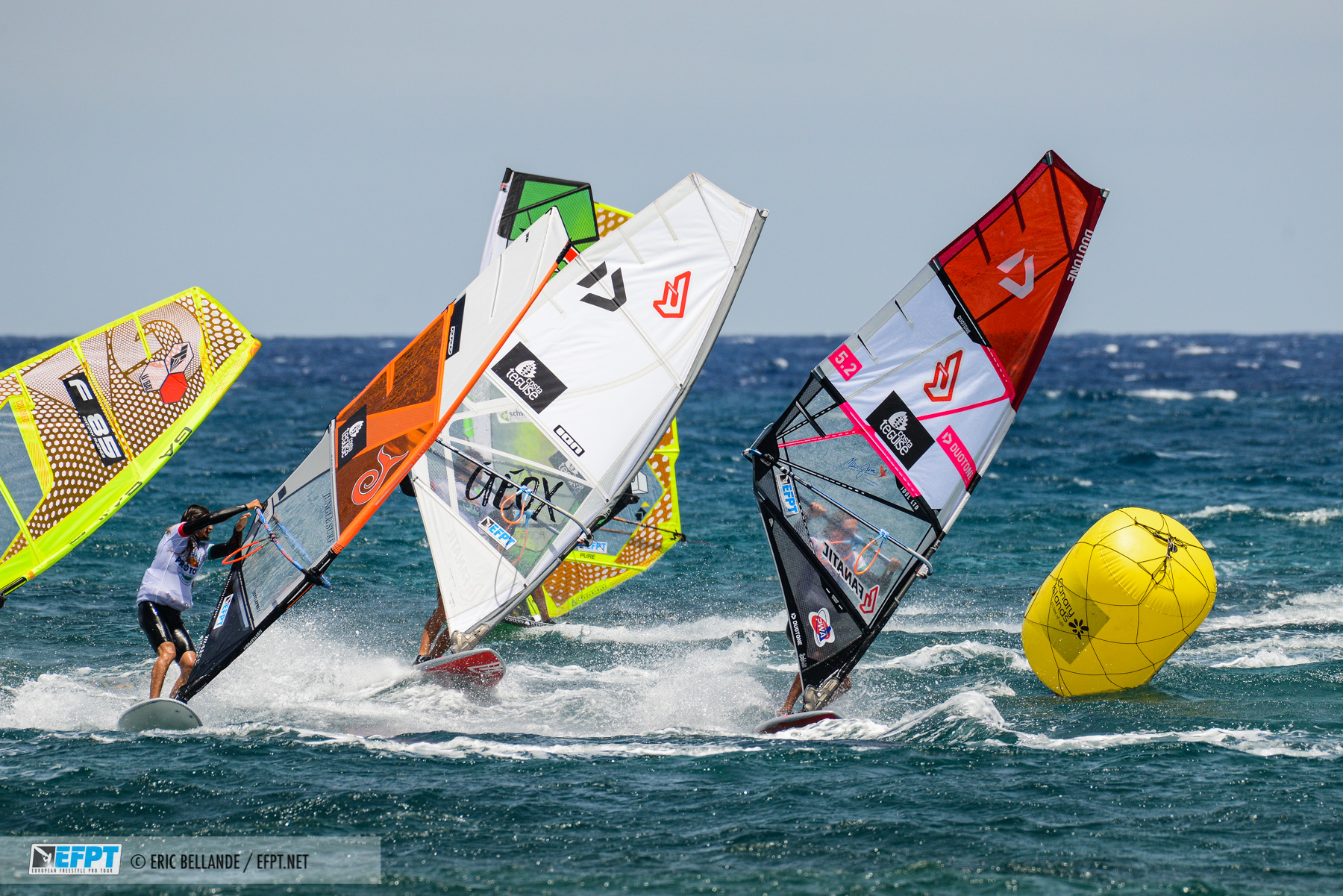 Racing around the buoys