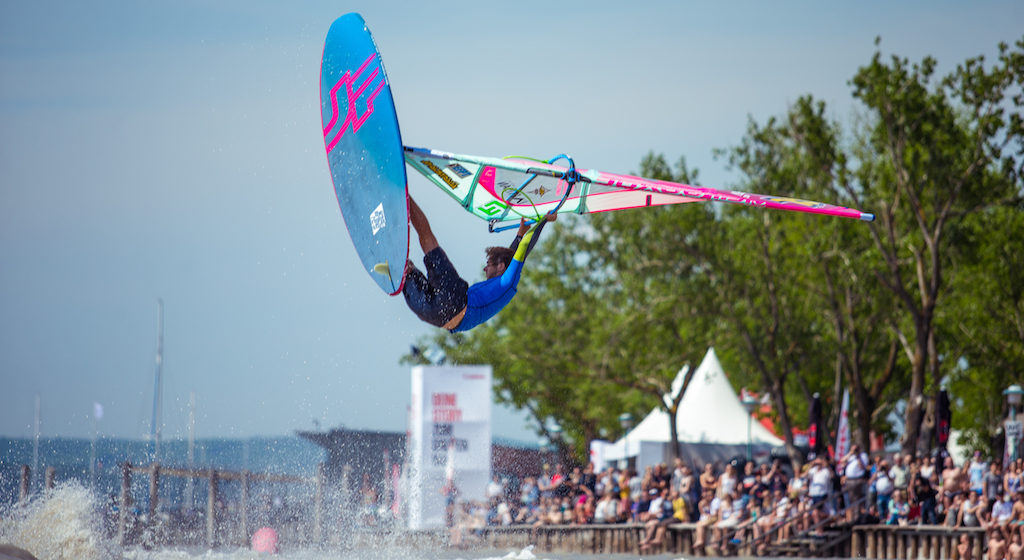 On the second day of the Surf Worldcup here in Neusiedl am See, Austria thousands of spectators were welcomed by beautiful weather. Tow-in at midday and in the evening entertained the crowd that gathered on the beach to enjoy the show.

Tow-in Fleet 1:
Apart from the 15.000€ prize-money, the organisation put up 3.000€ for the finalists of the tow-in competition. Three fleets with five riders each were seeded according to the results of the previous events. Fleet number one, which was up first today, included some highly credited riders: Adam Sims (Sailloft/Patrik), who won the first EFPT tow-in at the Mondial du Vent last week, Sam Esteve (JP/Neilpryde) winner of the tow-in at the Surf Worldcup 2017, Italian freestyle stars Giovanni Passani and Riccardo Marca (North/Fanatic) as well as local rookie Matthias Kraschitzer (Goya/Goya) were the first five sailors to fight for the two spots in the final. Sims startet the round with a high air burner 360 and took the lead, before Giovanni Passani could land a perfect air burner 360 one handed to match the score of the Brit. Sam Esteve, creator of the ‚Samair‘, went through an air burner 360 in his first round and rotated through the most stylish air skopu in his second run, which led to the high score of 9.28 out of 10 points. Riccardo Marca went for an air burner, but unfortunately couldn’t get the landing. The crowd on the beach definitely enjoyed the show and commentator Marco Wedele from ‚Jaklar‘ did a great job in pushing the riders and the audience to cheer for the five contenders. Going through to the final on Tuesday are Sam Esteve and Giovanni Passini, causing an upset for the British tow-in champion Adam Sims. However there is still a chance, as the two riders with the highest scoring moves of the three qualification rounds, that did NOT qualify, can go through as the ‚lucky losers‘ to complete the fleet of the final eight.

Freestyle:
The increasing South wind, which has been causing challenging conditions for the tow-in, improved more and more so the judging boat was heading out to the water straight afterwards, to finish the remaining heats of the single elimination. First heat on the water has been the semi final with Riccardo Marca fighting against Giovanni Passani and Tonky Frans against Sam Esteve. The buoys were set and the judging boat on spot, yet the wind didn’t play ball. The riders were kept on 15 minute announcements, but the patchy conditions wouldn’t provide a fair competition. Since the situation didn’t seem to improve, race director Tom Hartmann called it a day for the freestyle competition round 5.00 o’clock, with the outlook for a great forecast tomorrow.

Tow-in Fleet 2:
The day was rounded off by the second qualification fleet of the tow-in competition with US freestyler Alex Mertens (Severne/Fanatic), Tonky Frans (RRD/RRD), Mattia Fabrizi (Patrik) and local boy Max Matissek (North/Fanatic) to fight for the next two places in the big final. Fifth sailor of the fleet, Felix Volkhardt (JP) had to pull out due to severe tendonitis that he is suffering from since the last EFPT event in France a week ago. Taking his place in the qualifying round has been former Austrian freestyle champion Lorenz Forstenlecher.

With the setting sun an a packed beach, the five riders were giving their best to stay in the fight for the 3.000€ prize-money and to please the huge crowd. With the setting sun, the floolight in front of the big stage was lit up, reminding us all of the very beginning of the tow-in contest in Podersdorf in 2012. Max Matissek took the lead in his first run with an air burner 360 one handed. The Austrian sailor had an advantage at his homespot, with the countless specators on the beach going wild after his trick. Mattia Fabrizi went over the wake of the mastercraft boat and answered with the perfect air burner one handed, that he sailed out of. He could beat Matisseks score by 0,44. 18 years old Alex Mertens showed some great nerves by entering today. He landed a solid burner and finished in third position. Tonky Frans who sticked double air culos in training, couldn’t get his game in the competition and dropped both of his attempts. However being one of the favorites of the crowd at every event, he was granted two more runs that wouldn’t count though. Frans went for huge double air culos, that were honored by the judges and the crowd. Once again it was incredible to see how much this discipline developed over the past years.

The forecast for tomorrow looks great and we are very optimistic of finishing the single and starting the double. Highscore of today by Sam Esteve (by Martin Reiter)