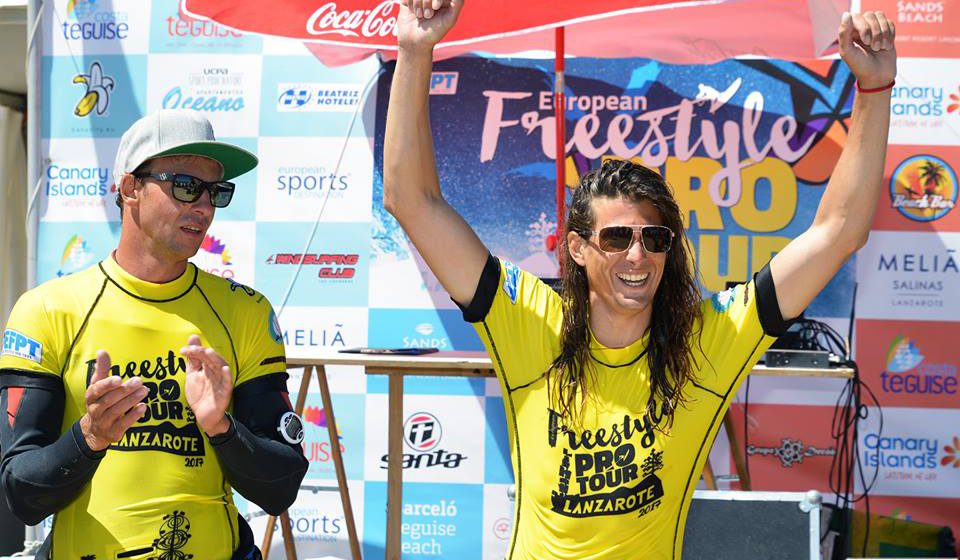 With the third day of the competition and the remaining heats of the second double elimination, came new chances, yet also disappointments. With a slightly lighter forecast than yesterday, the pick of gear was between 4.8s – 5.2s and the 90lt freestyle boards.

Still having the chance of winning the event, by sailing his way back up in the double elimination, all eyes were on Jacopo Testa (RRD/RRD). Testa was sailing eight heats in a row, taking out Wiemar (Starboard/Severne), Riccardo Marca (North/Fanatic), Loick Spicher (RRD/RRD), Giovanni Passani and Tonky Frans (RRD/RRD) to then face Yentel Caers (JP), Sam Esteve (JP/Neilpryde) and Steven Van Broeckhoven (JP/Neilpryde) in the final heats. The stylish Italian sailor was dispatching one by one by landing spock culos, kabikuchis one-handed, bonkas, paskos, super high one handed burners, pushloops, shove-it double spocks and regular chachoos in pretty much every heat. In the first two heats of the day, the RRD rider didn’t even get his hair wet. Yentel Caers was putting an a great fight against Testa, landing a big shaka, a perfect double culo, a pasko and a perfect burner 360 just to name a few moves. However, the decision favored the Italian 5:0 in the end.

With highly technical skills and smart competition sailing, Testa also advanced over the young French sailor Sam Esteve in the battle for second position, who could get some decent maneuvres in on starboard tack, yet had no chance on porttack, whilst Testa used the ramps for big jumping tricks. By that time Testa already looked a bit tired, yet he could convince the judges with a spock culo, a supernice shove-it double spock, a bonka and a regular chachoo plus a lazy susan both within the last minute of the heat. Those were also the moves that finalised the decision in the end.

After sailing nine heats in a row, Jacopo Testa therefor took overall victory in the EFPT Lanzarote 2017, with Steven Van Broeckhoven on second and Yentel Caers on third place. Jacopo Testa with the signature move (by Eric Bellande)

Tomorrow will start really easy with the skippers meeting at 12.00 midday. A supercross is schedulded for the afternoon with the chance to win a whole week of free accommodation in the Sands Beach Resort for two persons. We are looking forwards to a relax and fun day tomorrow and the prize-giving in the evening.