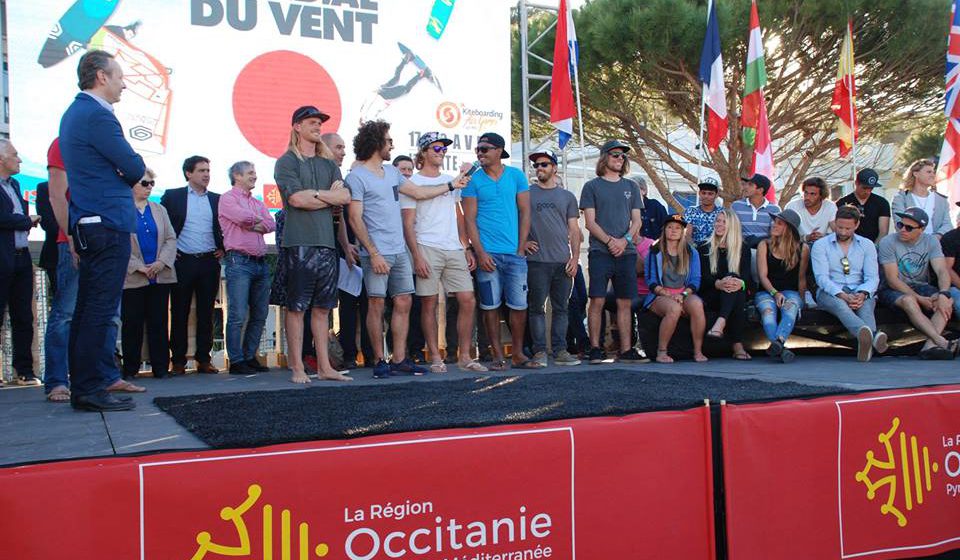 The first freestyle event of the season – MdV Day 1

It is this time of the year again and the freestyle windsurfers reconnect after weeks and months of winter training at some of the best spots worldwide, to match each other at the first freestyle event of the year. This season is launched with the EFPT stop at the Mondial du Vent in Leucate, France. The event gained recognition over the past 20 years by providing a perfect organisation, an amazing spot and last but not least a great show by all the riders, wether they were windsurfers or kitesurfers.

After several days of strong wind in the past weeks, the place welcomed the riders and crew today with calm and sunny weather and the ideal conditions for the first few hundred of the many thousand specators who are visiting the event-site every year. Big names of the freestyle windsurfing circuit signed up at registration, in anticipation of some competeable conditions within the next five days. Steven Van Broeckhoven (Gunsails / JP), multiple European Champion and World Champion will fight again for the title this year. After his sponsor change, the routined Belgian is more than eager to get back to the top. The Italian crew around Riccardo Marca (North/Fanatic), Giovanni Passani and Mattia Fabrizi (Patrik) will definitely try to make his life harder. All of the Italians have been training in South Africa over the winter and are ready to display their skills in the one on one scenario. Nicolas Akgazciyan from France and Antoine Albert (Goya/Goya) from New Caledonia are certainly title contenders for this year and signed up for this first event, just like freestyle legend Tonky Frans (RRD/RRD) and Antony Ruenes just to name a few. Adam Sims (Sailloft/Patrik) from the UK, who had a to undergo spinal surgery in 2017, will also step back into the game from this event onward. The Brit is not only responsible for the EFPT videoproduction, but will also prove his potential in both disciplines – freestyle and tow-in. The forecast for the next days is on the light side, but we are having high hopes in running some heats tomorrow afternoon. In case of insufficient conditions, a tow-in competition will be staged at the beautiful shores of Leucate.