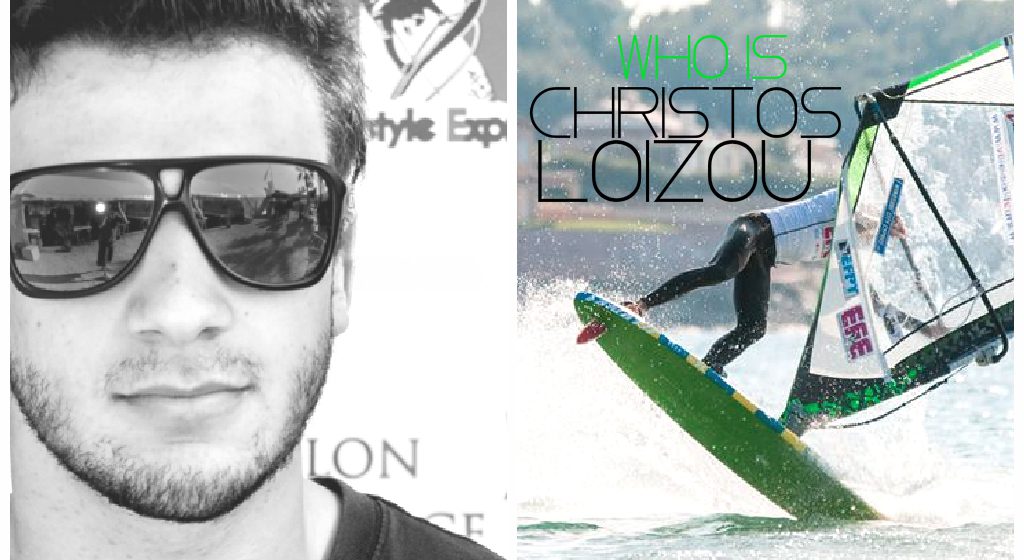 Who is Christos Loizou?

This time the one and only EFPT rider of the small island of Cyprus made it into the fresh faces section on efpt.net. Find out more about the up and coming young North/Fanatic rider Christos Loizou.

EFPT: Christos can you tell us a little bit about yourself?

Christos: My name is Christos Loizou, I am 18 years old and I come from the small island of Cyprus. I just graduated from high school and now I have to complete my obligatory military service for 2 years.

EFPT: Where do you train and what is your favorite maneuver?

Christos: I mostly train at Mackenzie Beach which is my homespot but I also sail in many other spots to gain experience in different conditions. My favorite move is the burner one-handed but I also like culo, kono, skopu and ponch! EFPT: Did you compete in national and international freestyle windsurfing events before? What is your best result?

Christos: Unfortunately in Cyprus we don’t have a national event. I have competed in the EFPT /EFE Six Fours 2014 with the result of 33rd in the overall ranking for 2014.

EFPT: Who is your favorite freestyle windsurfer and why?

Christos: My favorite freestyle windsurfer is Gollito Estredo (North/Fanatic) because of the style he has in the moves and also his technique. In addition to that, the fact that he is a proper athlete also out of the water is something I consider very important because he is being a role model and promotes the sport to be taken seriously.

EFPT: What inspires you and who do you like to sail with?

Christos: I have to say my biggest inspirations are chasing my dream and being successful! Just waking up everyday with a different goal that leads to the same end-result gets me really motivated. I like to sail with my friends or even alone sometimes when I need to train hard but I’d say my favorite person to sail with is my friend Hamada!

EFPT:  You entered the EFPT for the first time in 2014. How did you like it and what are your competition plans for this year?

Christos: I loved it! It was a great event, not so happy with the conditions but we had a good time in France. My competition plans for this year are still not so clear due to the army because I cannot know now if I can attend the events I want but I would say most of the EFPT events and maybe the PWA in Fuerteventura if I can get a wildcard.

EFPT: What do you think about the tow-in competition?

Christos: I think it’s not bad when there’s no wind and since we can’t control that it’s good to have it as a backup plan although it’s not as fun as proper freestyle with wind. EFPT: Did you prepare for the 2015 contest season and if yes how?

Christos: This year I prepared a lot for the upcoming season by training everyday in and out of the gym to boost my stamina and I tried to sail in different conditions whenever possible to vary my training. Last summer, which was my training period for the season, was really windy at home so I could progress a lot but in February I suffered a big injury and had to stay away from all kind of sports for some time which really threw me off plan and now it’s not windy at home but I’m still feeling confident.

EFPT: Since when are you with North and Fanatic and what is your favorite set-up?

EFPT: What are your goals for next year and the future?

Christos: My goals for next year are to be on the water as much as possible and train really hard so I can achieve the level I want along with a good ranking! Moreover, achieving good A-Level results is definitely on my goal list, which is the reason I’m training a bit less now. For the future I am still not sure. It all depends on the Cyprus Sports Organisation and the army. If they let me train as much as I need to to achieve the level I want, I will attend as many events as possible or even do a full tour for a year and then study after completing my army service.

EFPT: Thank you Christos and all the best for your next EFPT event at Milos Beach Lefkada!

The Milos Beach Freestyle Open in Lefkada will take place from the 29th of May – 1st of June 2015. The fleet is a small one, yet a very very strong one. We are all very excited that the EFPT can return to the shores of Lefkada after several years of break.