On day two of the EFPT Spiaggia Lunga Village, Vieste the spot provided the conditions that it is famous for. The north-westerly wind kicked in in the early morning hours already, to increase more and more with the weather clearing up and the rising temperatures. The riders were sent out on the turquoise colored water at 10.00 am, to compete in sideshore conditions, with small ramps perfectly lined up to perform the latest powermoves with some additional height in an action packed single and double elimination.

With a fairly small, but extremly strong fleet, already the second heat on water was impressive to watch. With a duration of 10 minutes and three counting moves each tack, Jacopo Testa (RRD/RRD), who was placed second in the EFPT Las Dunas Costa Brava proved from minute one that he was on form this season.

The second heat on the water had been the battle of the EFPT media team, with Adam Sims (Sailloft/Patrik) sailing against Alex Mertens (Severne/Severne) from the US. After debuting on tour in 2018, Mertens definitely got more confident in competing, but couldn’t advance over Sims. 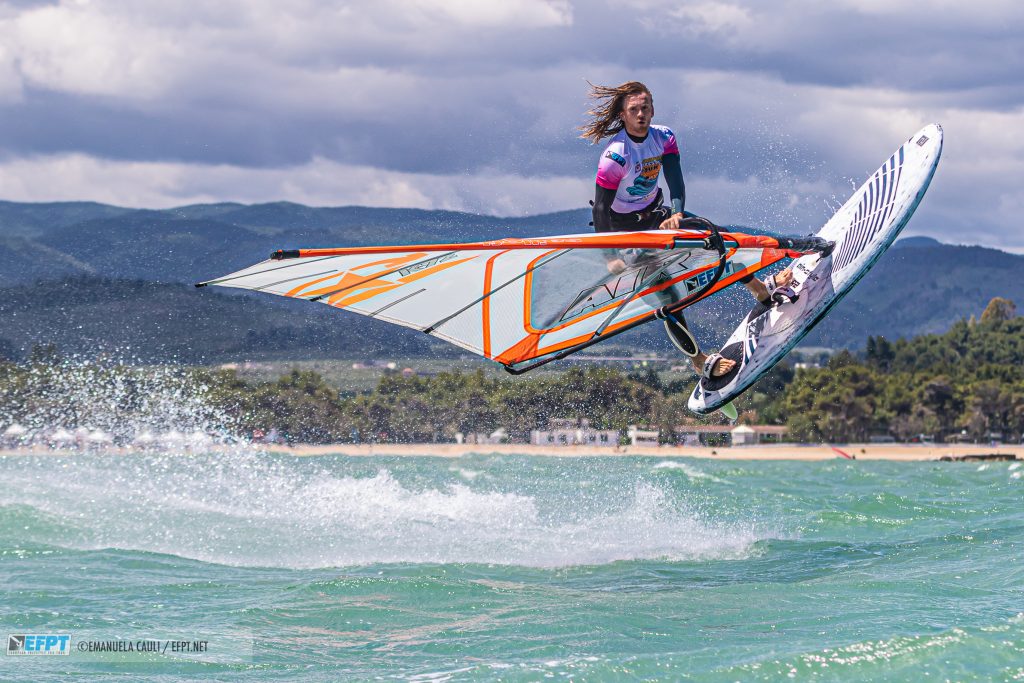 Progressing in the heats, Caers showed some serious explosive sailing already in his first battle today, which he opened with a perfect double burner to then reach a score of 40 points in the first five minutes. He furthermore landed a perfect pasko and shifty on port tack and a double culo, air funnel burner and air bob culo to count on starboard tack to dispatch of local sailor Cesare Latino in round two and Francesco Cappuzzo (RRD/RRD) in a very close heat in the quarter final. The Italian, who is always a tricky opponent, landed a shifty, pasko and burner 360 as well as a kono, double culo and spock kono but had to give way to Caers in the end. 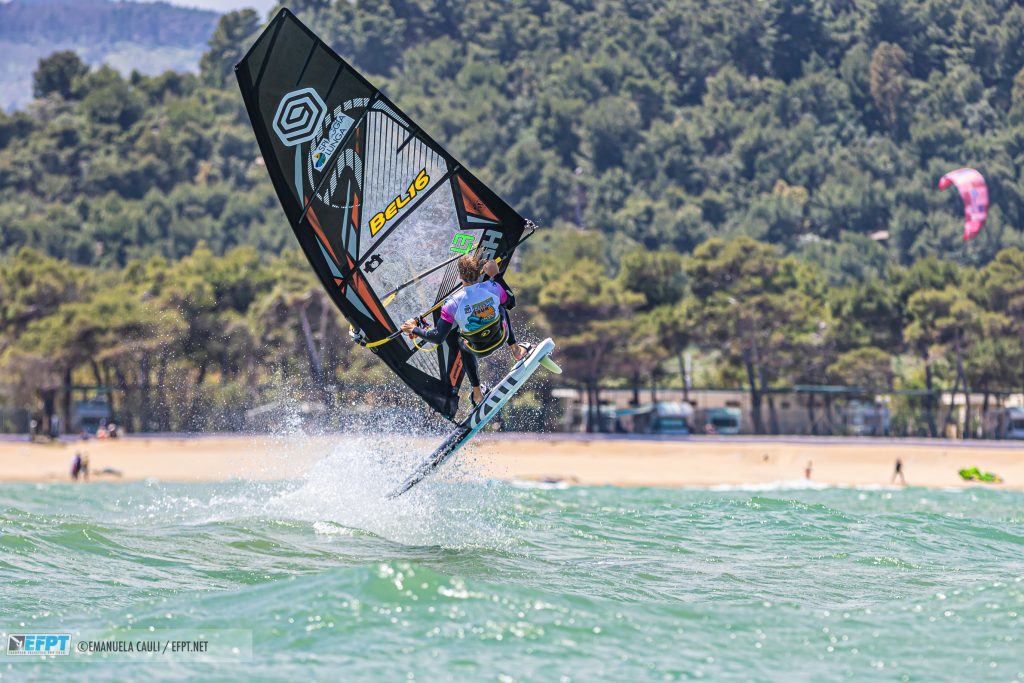 Davy Scheffers from Holland, who is currently placed 4th overall, also made his way up to the semifinal by taking down Eilon Wilson (Patrik) from Israel and Riccardo Marca (Fanatic/Duotone) from Italy, who showed a decent performance today. Even though Marca seemed to have found his routine again in his heat against Eugenio Marconi, the Italian had no chance to defeat Scheffers. The Dutch sailor marched through all of his heats, scoring way over 30 points, however came to a dead end when he met Yentel Caers in the semifinal.

Italian Giovanni Passani took on the Dutchie next and sailed his best scoring heat of the day (47,05), dominating over Scheffers, taking revenge for losing against his team-mate in Costa Brava last week. 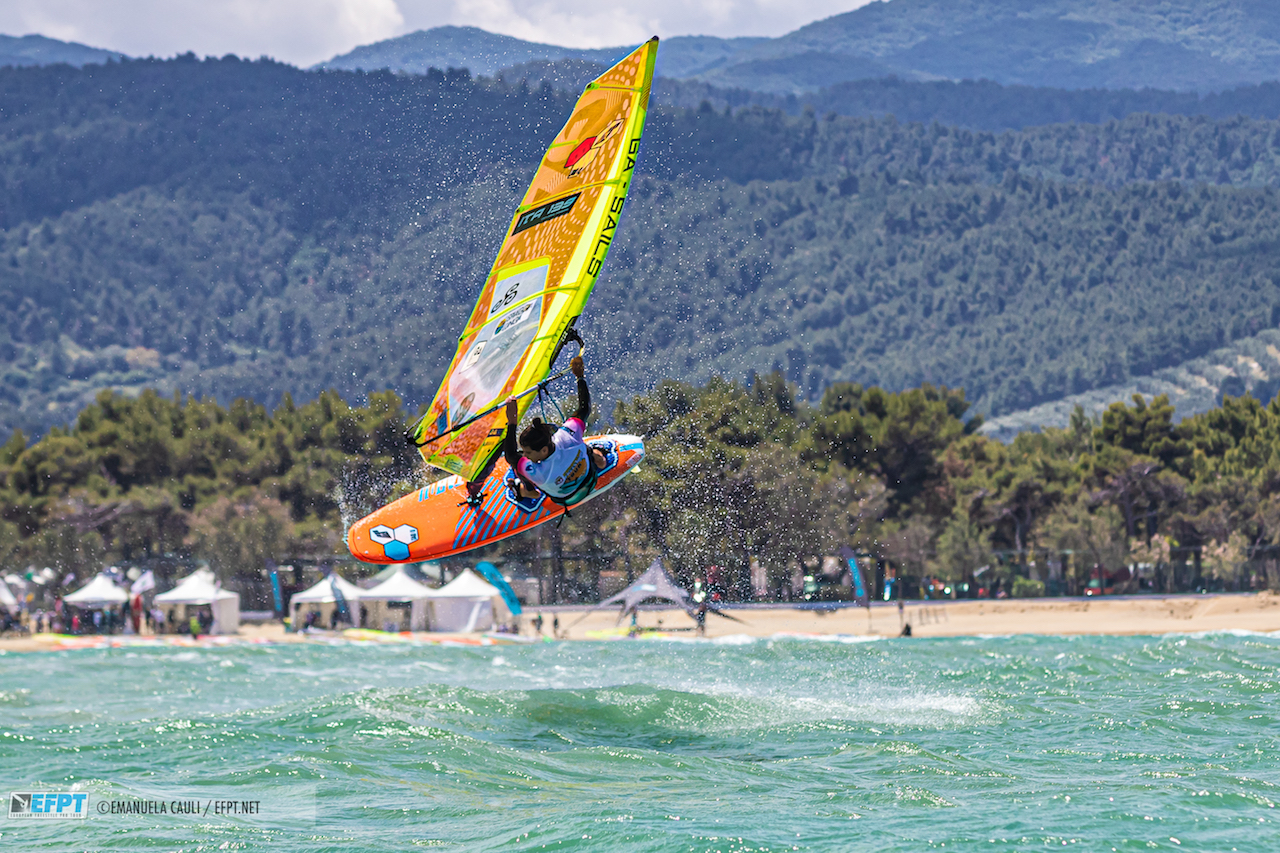 Giovanni Passani on his way back up to the podium

European Freestyle Pro Tour title hopeful Jacopo Testa, took out Israeli Yarden Meir (Goya/Goya), Mattia Fabrizi (Patrik) and eventually also Giovanni Passani in a very close heat for the move into the semifinal. The RRD rider landed bongkas, paskos, one handed burners, as well as kabikuchis, spock culo & kono combinations and stylish shove-it spocks in most of his heats, displaying why he is a feared opponent.

Once again the big final featured Yentel Caers against Jacopo Testa, a battle that we had seen in Costa Brava just recently. This time however, the Italian could claim victory with the highest scoring heat of the day (51,84 points). With four moves counting each tack from the semifinal onward, both riders filled their judging sheets with several outstanding moves and combinations in a world-class final.

Podium after the single elimination:

With the wind starting to stabilize more and more throughout the day, the double had been started straight away.

There have been some riders seeking revenge after the single elimination, one of those once again being Mattia Fabrizi, who seems to be one needing the pressure. Fabrizi had a flying start in his first heat of the double against Eliran Levi, landing a pushloop, backloop and shaka going out and burner, spock-culo and double culo coming in. He then dispatched of Adam Sims (Sailloft/Patrik) and Francesco Cappuzzo in another extremly close decision, taking the lead by 0,57 points only. The only one who could stop Fabrizi marching any further had been Davy Scheffers in the battle for 4h place. This time the close outcome favored the other sailor and the Dutchie could defend his position by stomping a burner, an air funnel and a switch backloop on port and a kabikuchi, culo 360 and regular chachoo to count on starboard tack.

Scheffers looked determined to make his way up to the podium, but got stopped by Giovanni Passani in the upcoming fight for 3rd place. In the heat for 2nd place, Yentel Caers crashed only one of the 16 moves he attempted, scoring 46,74 points and leaving the Italian way behind (35,64), to then face Jacopo Testa in the final. 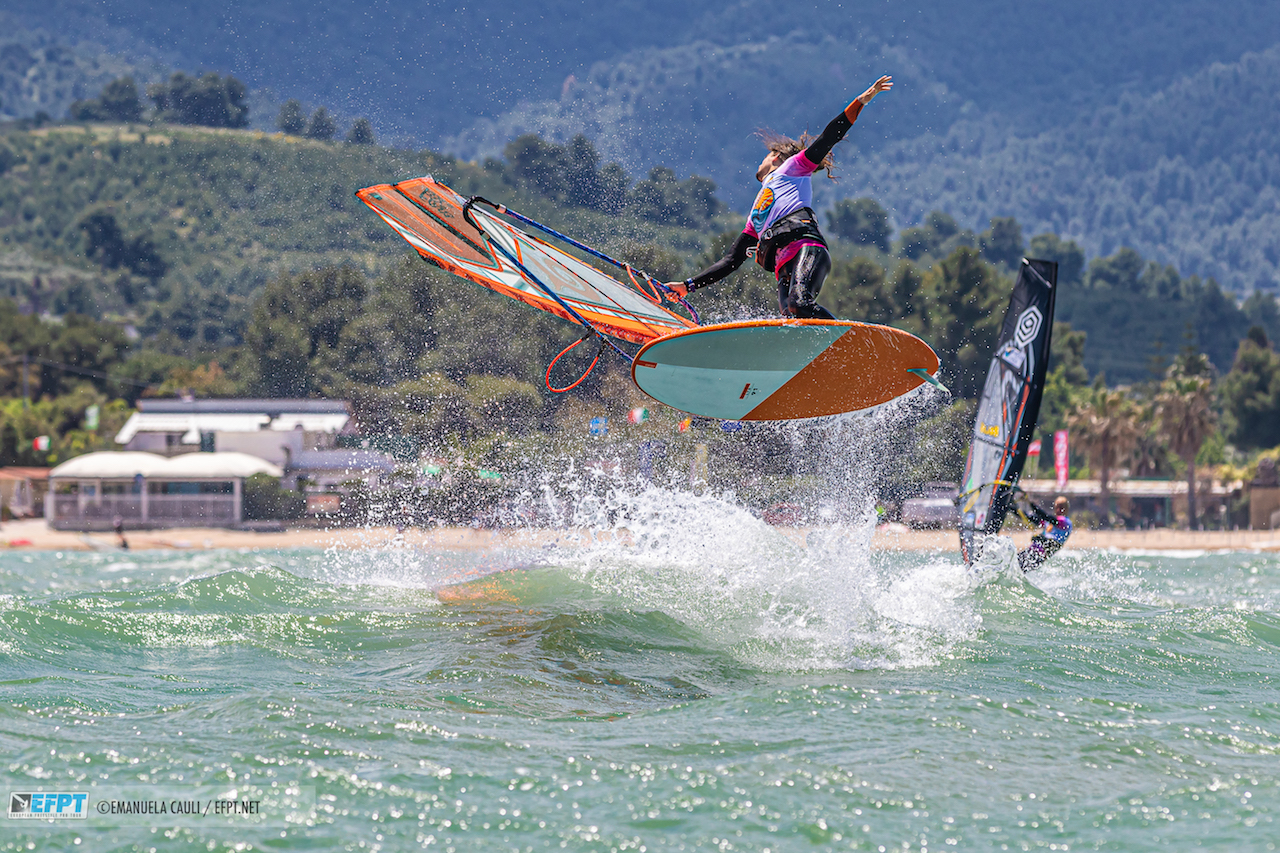 One handed burner by Jacopo Testa

The decreasing wind led to the cancellation of the final heat, that could luckly be re-started after a short break only. In a more than worthy final the two sailors matched each other in another close freestyle frenzy, that favored Caers by 0,5 points in the end, leading to a superfinal, to determine the winner of this double elimination. In dropping conditions, Caers seemed to make all the right choices considering his gear and the position in the heat area and could dominate over Testa.

The result of the double elimination:

We still have two full event days left and will start another elimination as soon as the conditions allow it. For now we’d like to congratulate the sailors to their outstanding performances today. 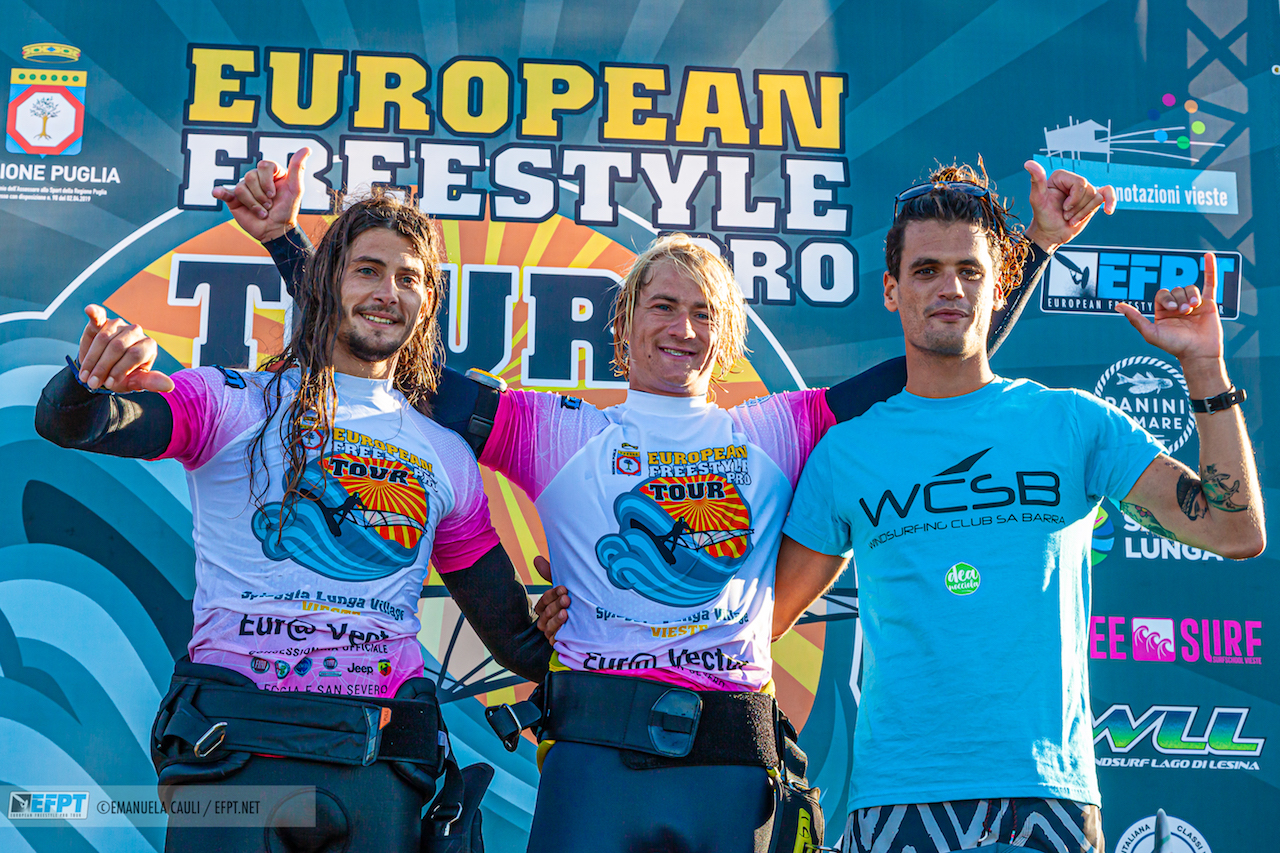