After a long waiting period over the last days, the sailors have been craving to finally start with the freestyle competition. The prayers for wind have been answered today and Costa Brava delivered amazing freestyle conditions from noon until the late evening. On an action packed day, the juniors single elimination had been finished as well as the the single elimination of the pros. The riders in both divisions displayed a phenomenal level and we’ve seen some incredible close and exciting heats with new highscores.

What would have been a PWA freestyle final about ten years ago, now seems to be the average level amongst the EFPT juniors. Especially impressive in the juniors fleet have been Lennart Neubauer (Severne) as well as Nil Bacon, Stefan de Bell (Patrik) and Eugenio Marconi, the top four of this event.

We’ve seen a close heat between Marconi and Bacon, when both riders showed a great variety of technical moves. Both sailors have been filling up their sheets with moves like burners, culos, shakas, ponches and konos. In the end Marconi missed a move and Bacon had to face Neubauer in the fight for place one and two.

In the losers final Marconi didn’t leave anything to chance and landed his three counting moves per tack, to dispatch De Bell to fourth place and claim 3rd.

The juniors winners final had been as close as it gets. Neubauer and Bacon matched each other with their tricks. However Neubauer could score more points due to a better execution and style. Lennart Neubauer therefor claimed victory in the single elimination, despite of a point difference of only 0,31.

The top 3 of the EFPT juniors: 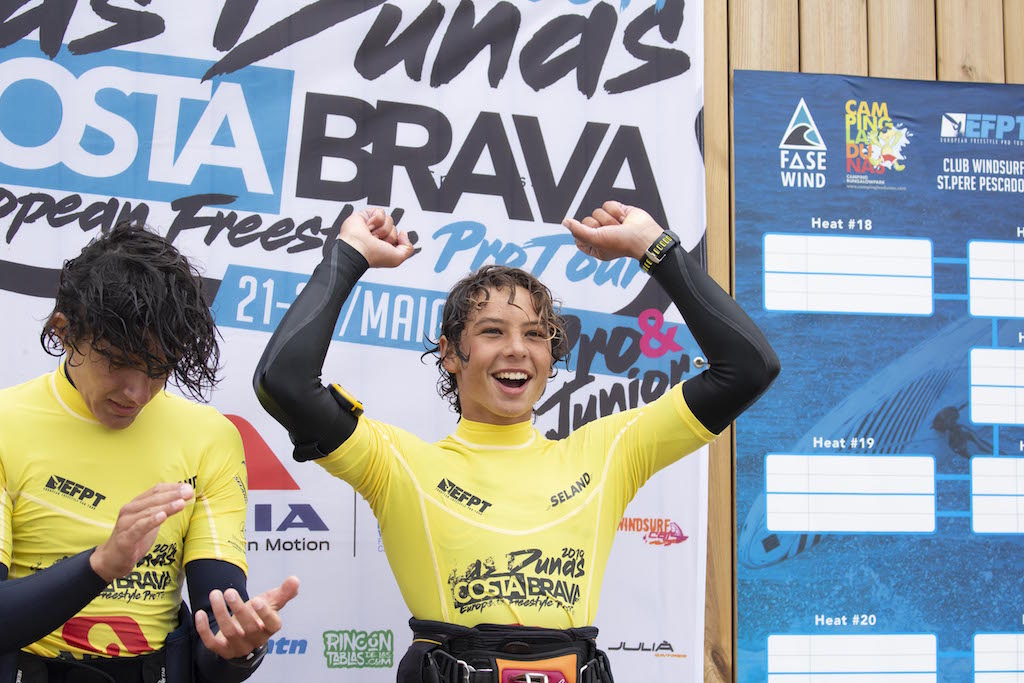 Due to the conditions that have been slightly up and down throughout the day, the heat duration had been extended from eight to ten minutes, with three moves counting each tack for the first three rounds.

Apart from the top four, there have been some outstanding perfomances today. 16 years old Mathis Mollard (JP/Neilpryde) caused an early upset for Adam Sims (Sailloft/Patrik), by taking out the Brit in the first round, after their heat had to be re-sailed several times. It had been a close decision, but the young Frenchie could move on to the next heat to face Sam Esteve (JP/Neilpryde). Esteve has also been the first one today to crack the 40 points in his heat against his fellow countryman Mollard, going for with a crazy air kabikuchi and a pasko counting more than 8 out of 10 points respectively.

Mathis Mollard in the pro division

Some of the most impressive moves today was surely the kabikuchi- kono from Antoine Albert (Goya/Goya) who landed this maneuver for the first time ever in this competition. Albert could advance over local rider Ferran Recasens and Mattia Fabrizi (Patrik), yet had been stopped by an on form Yentel Caers in the quarter final.

Valentin Böckler (Gunsails) from Germany sailed a solid heats against Israeli Eilon Wilson (Patrik) and another super close one against Davy Scheffers. Böckler had to let Scheffers pass to the next round by a difference of 0,004 points only. 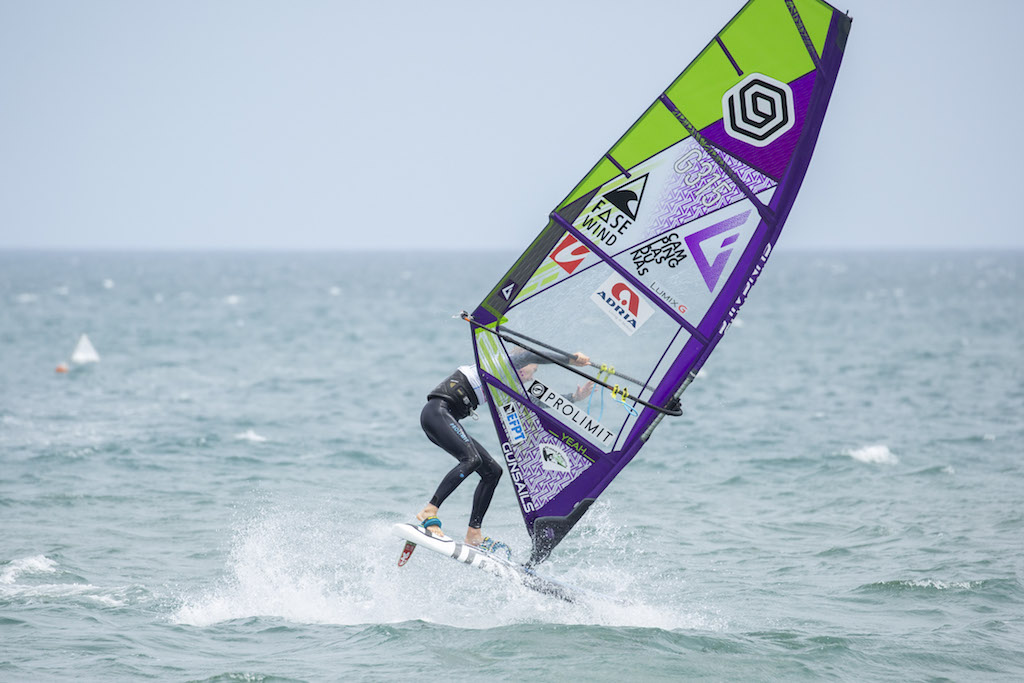 Valentin Böckler in the single elimination

As we proceeded in the competition, the level became more and more ridiculous with several heats hitting the 50 point mark. From the quarter final onward, four moves were counting each tack. Caers was on fire in his battle against Albert, landing a pasko, a bongka, a shifty and a shove-it spock on port and a burner 360, kabikuchi, spock culo and an air bob culo on starboard tack. Even though Albert answered with big moves of his own, including the kabi-kono, he couldn’t stop Caers marching through.

Form the other side of the draw, former European Champion Jacopo Testa (RRD/RRD) worked his way up, by taking out Nil Bacon in the first round and team-mates Loick Spicher and Francesco Cappuzzo in the second round and the quarter final repectively. Finally back on tour, Testa displayed his skill-level in all of his heats, but could score especially high (50,53 points) in the heat against Francesco Cappuzzo (46,44), who himself was one of the guys to beat today. Testa moved onward to the semi-final, but couldn’t go past Steven Van Broeckhoven (Gunsails). In the losers final, the Italian had to sail against Davy Scheffers, a heat that he dominated with 43,23 versus 31,09 points. 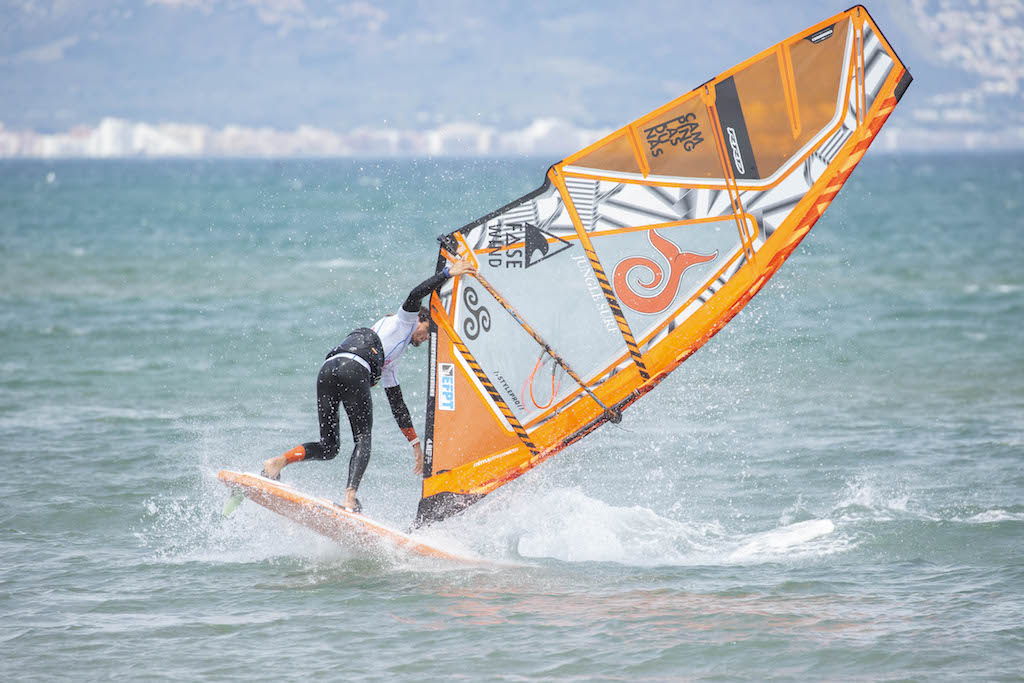 Van Broeckhoven, who remains a contender for the title year by year, moved past Lennart Neubauer and Sam Esteve, to then meet Testa in the semi-final where the Belgian sailed an amazing heat landing a shove-it spock, shaka 360, a bongka and a pasko on port-tack and a spock culo, double culo, burner 360 and kabikuchi on starboard tack. 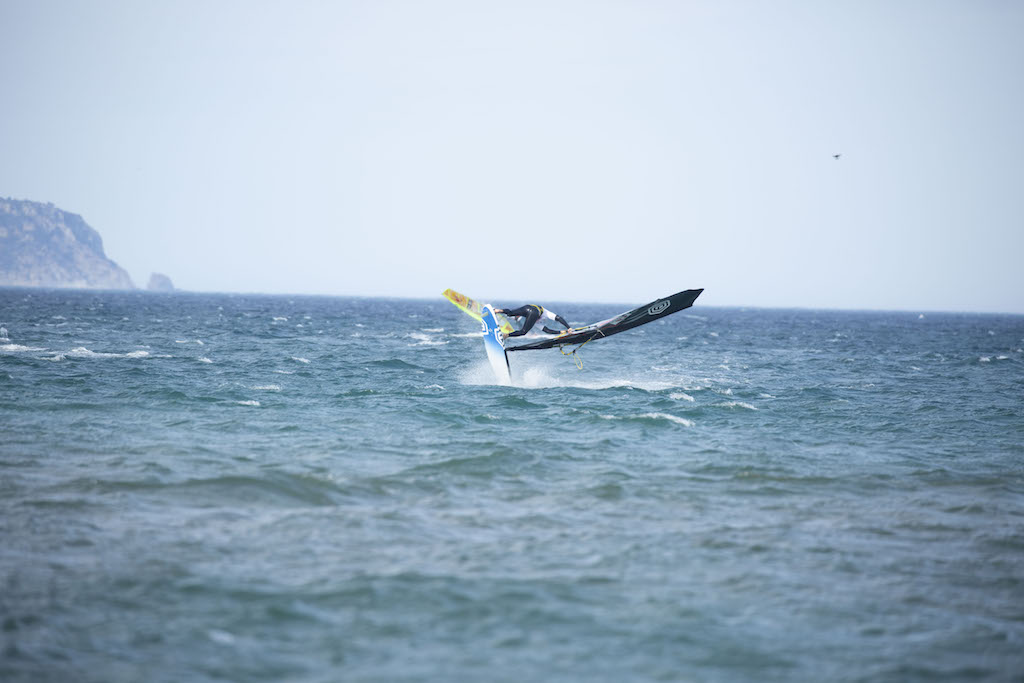 In the end, the two Belgian riders Van Broeckhoven and Caers met in the big final – a well known scenario in the EFPT. Even though Van Broeckhoven put together a solid heat, he didn’t manage to move past Caers, who put on a show that was second to none. Both riders landed bongkas, shove-it spocks, double culo combinations, air funnell burner combinations and kabikuchis. With 52,69 points versus 47,84 points, Caers could take down Van Broeckhoven.

Our top three after the single elimination:

With a great forecast for tomorrow, we are positive to finish the whole double elimination for the pros and juniors. 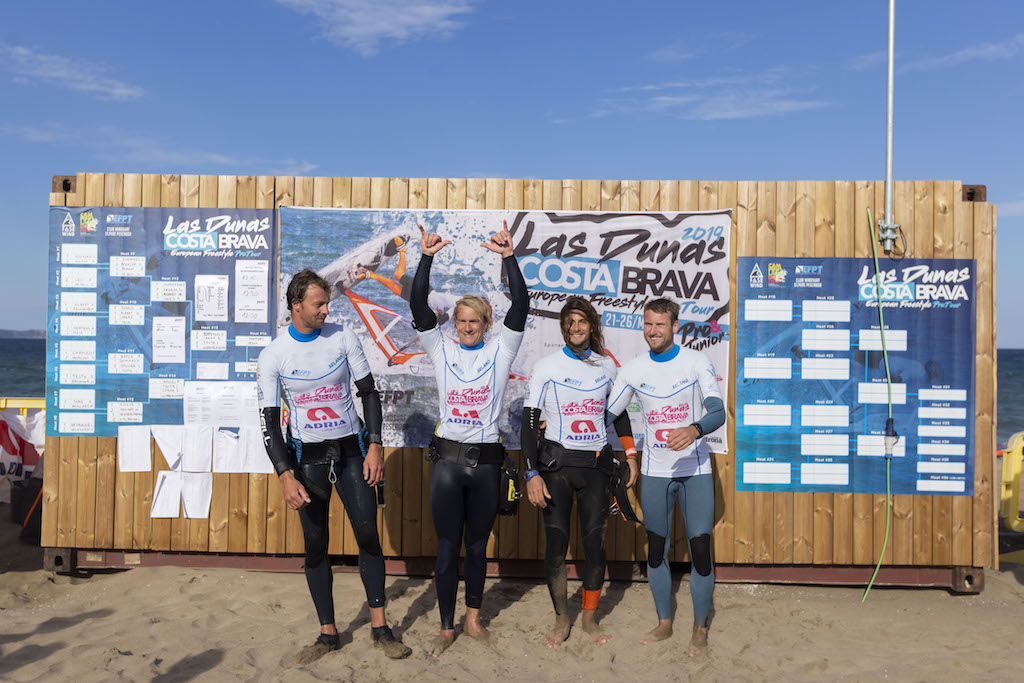